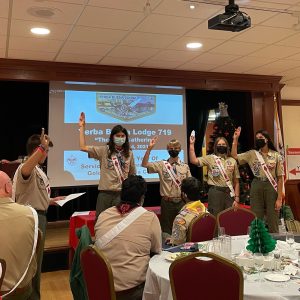 The Banquet started at 6:00 PM, with Chase VanDerveer and Aaron Carr-Elkaim acting as Master of Ceremonies for the event. We started with a speech from lodge chief Aditya Sriram as well as the Council Scout Executive Mike Hale. Then, member of the lodge enjoyed a meal catered by the Alameda’s Best Catering.

Introduced at the 1981 National Order of the Arrow Conference, the Founder’s Award recognizes Arrowmen who have given outstanding service to their lodge. The award is reserved

for an Arrowman who demonstrates that he or she personifies the spirit of selfless service, as advocated by founder E. Urner Goodman and cofounder Carroll A. Edson. Lodges may petition the national Order of the Arrow committee to present between two and four awards annually, depending on the number of members in the lodge. If the lodge presents more than one award, at least one must be awarded to a youth under the age of 21. This year’s Founder’s Awards recipients are Aditya Sriram and Wendy LaBerge.

Our program ended with the recognition of our new Vigil members, as well as the tap-out of our 2021 class of Vigil nominees. These are the first members to be nominated for the Vigil honor within Yerba Buena Lodge. The members recognized for this honor were Akira Tamaoki, Edward Sievers, Victor Chen, Vincent Tran, William Otani, Dean LaBerge, Michael Otani, Richard Calvert, and Stuart Mahler Sr.

Yerba Buena Lodge leadership thanks everyone who attended the event, and every member and non-member that contributed to a wonderful year. We thank everyone for their efforts to give our new lodge a fantastic start. We look forward to seeing you at our future events 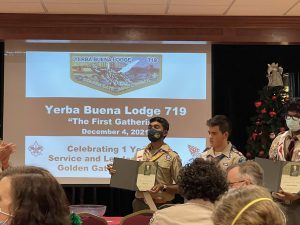